Call Them What They Are: How AOC Protests U.S. "Concentration Camps"

The pain and struggle in those camps must be spun into a persuasive narrative; and the phrase "concentration camps" comes with a narrative, with implications, with images of something that we globally swore we would never let happen again.

In New York City there's an organization that sometimes operates out of empty college classrooms and sometimes out of church basements.

Every week, hundreds of undocumented people flow into the crowded rooms, working with translators to fit their stories into I-589 asylum application forms.

One week a woman came in with her eight-year-old son. Her court date was in days, but she had yet to begin filling out her official forms; just part of her story lay in disarray on an intake sheet. As she told her story—which involved rape and murder and decades of abuse—she began to sob. If she went back to Honduras, she said, she would die.

Her story, which would likely make worldwide headlines if any fraction of it was being told by a white woman in America, is not unique at all; abuse of the kind she experienced is one of the most common reasons why migrants come to the U.S.-Mexico border to seek refuge. If you present yourself at the border as seeking asylum, you are legally entitled to a hearing, under domestic and international law; and once she tells her story to the court she may well not receive asylum. Still, for now she is one of the lucky ones: she made it past the camps at the border.

The Semantics of a Human Rights Crisis

This week, Alexandria Ocasio-Cortez described the camps holding migrants at the U.S. border as "concentration camps." Immediately, she faced protests from politicians across the nation, most of whom have never been to the camps at the border and whose main point of contestation was the argument that the prisons at the U.S. border cannot be compared to the concentration camps of Nazi Germany.

Criticism of Ocasio-Cortez's word choice is a convenient and fundamentally flawed distraction from the reality of what is happening. Firstly, both the Jewish people who experienced that genocide and the migrants who are attempting to cross the border are being caged, dehumanized, and denounced as vicious security and economic threats. Arguments that propose the suffering of the Jews is incomparable to the suffering of these migrants are a sort of Olympics of tyranny on the most depraved scale. How can the pain of one group delegitimize the suffering of another?

As a Jewish woman, I feel strongly that any trauma lingering in my bone marrow from the deaths of my family does more to link me to the migrants at the border than it does to separate me from them. We are not solitary in our persecution. Our struggle, as well as the lessons we have learned, means that we should feel a nauseating shock of recognition upon hearing that a group of people is being caged in brutal conditions on the basis of where they were born.

Though the meaning behind words is ultimately more important than the words themselves, semantics and word choice are undeniably powerful. As humans, we cling to symbols and patterns to make sense of our disorderly world. Words have sway over us, which is perhaps why calling the border camps concentration camps has sent such shockwaves across news outlets—more shockwaves than the reports of freezing cages, desert shootings, and persistent abuse in government facilities have created. In truth, words and our ability to freely speak them are often more incendiary than incidents of abuse and human suffering.

This is why calling the camps at the border concentration camps is a powerful act of political protest, one that merits repeating. In order to effectively protest these camps, merely telling stories of the human suffering that occur within them is not enough. The pain and struggle in those camps must be spun into a persuasive narrative; and the phrase "concentration camps" comes with a narrative, with implications, with images of something that we globally swore we would never let happen again.

The Holocaust, like most genocides, did not arise spontaneously. It began because of money—because of economic insecurity in Germany, a nation that had once been powerful but found itself suffering after wartime loss and a recession. It began with scattered proposals that Jewish people and other minority groups were to blame for these problems. It took off as a way of making Jews leave the country. The violence started with sporadic murders. The camps came later.

Even if the U.S.'s persecution of migrants at the border never reaches the level of the Final Solution, this does not legitimize the mistreatment and brutality that are occurring in those overcrowded, freezing prisons in the desert. Should the Holocaust be the standard that we expect human rights violations to live up to in order to merit serious criticism?

Andrea Pitzer, author of "One Long Night: A Global History of Concentration Camps," writes that the border camps qualify as concentration camps because the prisoners there are detained "without regard to individual circumstances, treating people as one mass, one group," and that the U.S. government, like the German government, is "presenting them as a national security threat to the country and then using as punitive means as the system will allow to detain them."

This is a key requirement for the success of concentration camps: prisoners must be turned into shadowy, menacing masses. Through a variety of rhetorical strategies, the U.S. government has implemented this technique. Many Americans are convinced that migrants are criminals who should keep out of this country. They argue that refugees are not deserving of our justice system or our charity, nevermind that the justice system systemically targets poor and non-white people and that we are the richest nation in the world.

Most of the detainees are not criminals. Conditions in these migrants' homes are unbearable; the fact that they are willing to risk death at the U.S. border to escape shows this clearly. Migrants are usually not asking for charity or trying to steal the salaries of U.S. workers. They are asking for asylum. For mercy. For America to be a fraction of what some people once dreamed it could've been.

Image via The New Yorker

Call Them By Their Real Names

Rebecca Solnit writes that once we call injustices by their names, "we can start having a real conversation about our priorities and values. Because the revolt against brutality begins with a revolt against the language that hides that brutality." Alexandria Ocasio-Cortez has shown that she is unafraid to put this into practice, to look the murky viciousness of the U.S.'s treatment of migrants at the border straight in the eye. By calling the concentration camps what they are, she is replacing the language that legitimizes these injustices with language that condemns them. Unfortunately, she is largely alone in this.

Here is the name of our American S.S., the group that is fostering the concentration camps at the border: the ICE, or Immigration and Customs Enforcement. (Like the leaders of S.S., they also believe they're simply "doing their jobs").

Here is a number: the ICE held 42,000 migrants in its detention camps last year.

Here is a list of DHS reports about the conditions at the border, including titles like "Lack of Planning Hinders Effective Oversight and Management" and "Immigration and Customs Officials Do Not Follow Federal Procurement Guidelines When Contracting For Detention Services."

Here are just a few quotes from official statements about the camps: A 2017 inspection found "problems that undermine the protection of detainees' rights, their humane treatment, and the provision of a safe and healthy environment." A Reuters report about the Paso Del Norte facility stated that "single adults were held in cells designed for one-fifth as many detainees as were housed there and were wearing soiled clothing for days or weeks with limited access to showers." It also stated that inspectors saw "detainees standing on toilets in the cells to make room and gain breathing space, limiting access to toilets." Additionally, there are reports of extreme temperatures, of physical and sexual abuse, of solitary confinement.

Right now, even the Customs and Border Patrol Commissioner John Sanders is demanding that the Senate pass a $4.6 billion dollar bill in emergency funding. If the bill is not passed, he testified, kids will keep dying.

Here are the names of some of the legally innocent people who have died at the border. Jakelin Caal Maquin, 7. Felipe Alonzo-Gomez, 8. Gurupreet Kaur, age 6, dead of dehydration in the Arizona desert. Roxana Hernandez, dead of untreated septic shock and HIV. Osmar Epifanio Gonzalez-Gadma, Jeancarlo Jiminez-Joseph, and Efrain Romero De La Rosa, all dead by suicide while in ICE facilities. Sergio Alonso Lopez, dead of internal bleeding after prison staff did not administer doses of methadone he needed to survive.

These names don't do justice to who they were and how they lived. No migrant story does, because migrants are whole people who want nothing but to live in America. They come for many reasons; they come knowing that they will be hated and discriminated against all their lives here—because, as poet Warsan Shire writes, "the insults are easier to swallow / than rubble / than bone / than your child body / in pieces."

Here are the names of some of the 200 ICE facilities:

The Adelanto Detention Center in California.

The Aurora Detention Facility in Colorado.

The nameless makeshift camp underneath Paso Del Norte International Bridge, which connects Ciudad Juarez with El Paso, where hundreds of migrants were held outside behind a chain-link fence covered in razor wire.

Here is the name of what these detention centers are: concentration camps. Remember these names. Imagine what you'll say when someone asks in the future: Did you know? 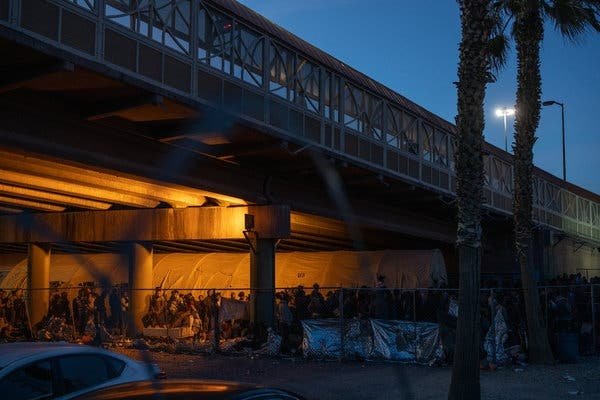 Image via The New York Times

Where to Donate to Support Afghanistan and Haiti

How to Support Evacuations from Afghanistan