Reduce your carbon footprint for Thanksgiving and beyond

Are you worried about your carbon footprint this holiday season? There's a limit to how much the responsibility for climate change individuals can take when industry is the true locus of the damage, and governmental regulation is necessary to reign it in. Still, with all the travel and the piles of food piled on top of other piles of food, it's easy to see why some people are taking note of the waste and pollution that results from these annual occasions. Does that mean we should give up these rare chances to celebrate and share with far-flung relatives?

Most of us aren't interested in that option, so how do we balance all the positivity of the holidays against the shocking environmental impact they bring? There's a number of methods you can add to your holiday traditions to help minimize your carbon footprint. Hopefully some of these options will fit into your holiday plans and reduce any stress about your carbon footprint.

Whether you're celebrating Thanksgiving, Christmas, New Year's, or Hanukkah, travel is likely the biggest factor contributing to your carbon footprint, but there are a lot of ways you can minimize your impact. Obviously the best way to cut down is to stay local for some or all of the holidays. Many young people prefer to celebrate "Friendsgiving" in their transplant cities and set aside time for video calls with family, rather than trekking back to their hometowns. And if you just don't like your family, pointing to environmental concerns is a perfectly legitimate excuse.

If that's not an option for you—or if you really love your family for whatever reason—choosing buses and trains over cars and planes is always a plus, and selecting a location that is convenient to the greatest number of attendees can make a huge difference. And if you're thinking of travelling to New York City for the Christmas tree lighting or the New Year's Eve ball drop, don't. They're awful. 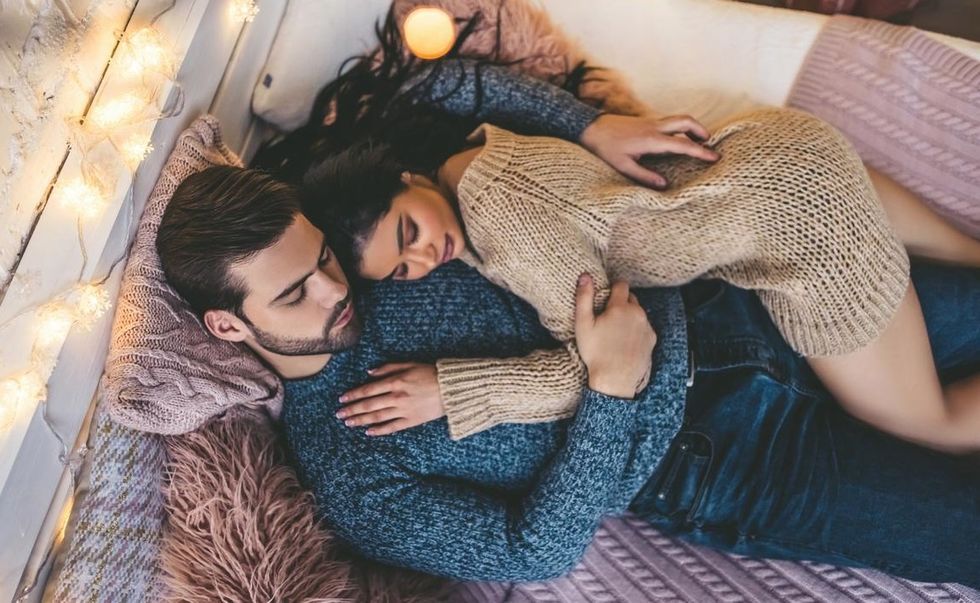 Winter heating is hugely wasteful. Any time you see icicles hanging off the side of a house or building, that's a clear sign of heat seeping out into the world. Insulation can go a long way to cutting down on both waste and costs, and signing up with an alternative energy provider like Green Mountain Energy can do a lot to minimize your impact, but there are other strategies that can help you do more while getting you into the holiday spirit, all of which can be summed up with two beautiful words: Get cozy.

Bundle up in your warmest sweater and a pair of thick socks. Share a blanket and some cocoa on the couch with your loved ones. Keep each other warm in one cozy room, rather than heating the whole house. A space heater can be a great way to cut down on your emissions and encourage your whole family to get a little closer.

Get Creative with Your Gifts 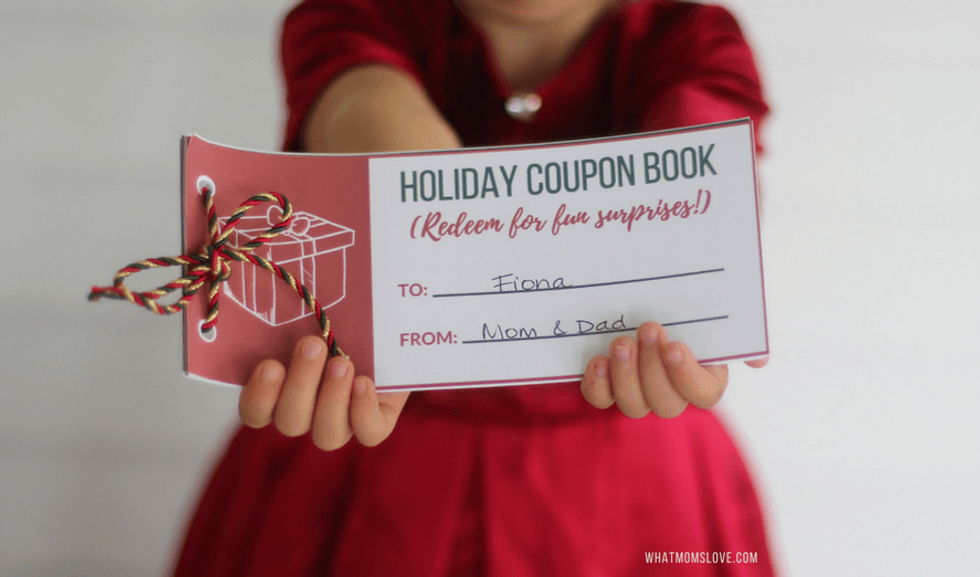 Green and eco-friendly gifts are a nice idea and can be really great if they're taking the place of a more wasteful purchase, but there is no ethical consumption under capitalism, and the waste that goes into the manufacture, shipping, and packaging of green-branded goods generally outweighs their benefits.

The greenest option is probably the one you haven't gotten away with since you were ten. A book of coupons for chores and favors doesn't cost you or the environment anything. But if you lack the courage to try pulling off a scam like that, there are some pricier experience-gifts that are a lot more eco-friendly—and a lot more memorable—than an solar-powered phone charger or a pair of pants made from bamboo. A gift card to a farm-to-table restaurant, a voucher for a massage, or just a donation to the Human Fund (or, you know, a real charity) are all great options that don't require wasteful wrapping. Alternatively, if you can make a gift yourself, you'll be a real hero.

Cut Down on Your Meat and Dairy 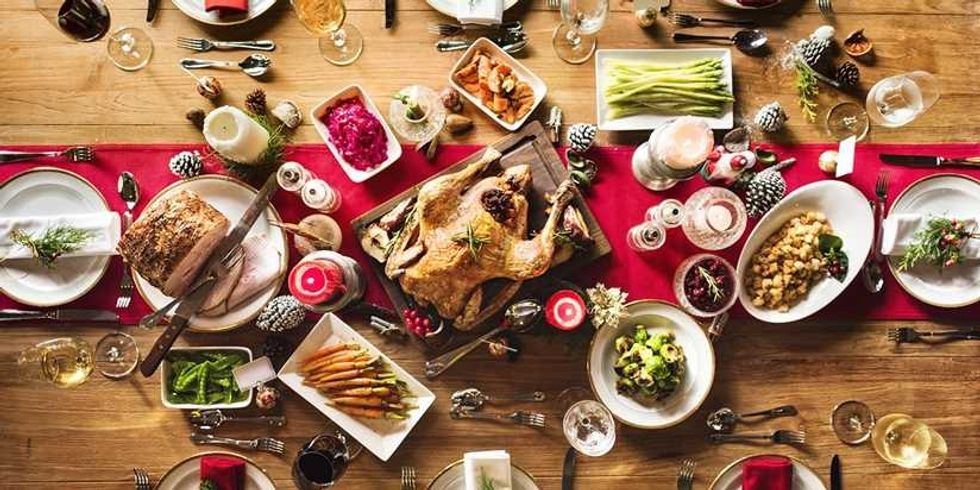 Okay, this is a big one. After travel, the food that we eat—and the food we throw away—are responsible for the largest portion of our carbon output. Meat is generally the biggest contributor, but red meat is particularly bad. So if you usually have a ham or a roast beside your turkey, cutting that out is a good move. And if you can cut out the turkey itself—or even just choose a smaller turkey—that's even better.

There are obviously other factors to consider, like the distance your food has to travel, and the amount of water that goes into its production, but you may not want to get your PhD before your next meal, in which case, cutting out meat is a simple and effective way to drastically reduce your carbon footprint. Meatless Mondays are an easy step that more people are taking these days, but if you're really concerned about your impact this holiday season, you can offset the added emissions from travel by cutting out meat for a few days, a week, or a month at a time.

If we made that kind of practice a part of our holiday traditions—cutting out meats for some portion of December—we could go a long way toward pairing back holiday emissions. With recent advances in meat alternatives from Beyond Meat and Impossible Foods, you might find the change easier than you would think. And if enough of us pick up the habit, the agricultural industry will have no choice but to shift toward more sustainable foods.

Most Environmentally-Responsible Meat You Can Eat

Every year, humans eat 70 billion animals around the globe, and 9 billion of them are killed in the U.S.

According to a recent article in The Guardian, the most significant way to lower your impact on the environment is cut out meat and dairy from your diet: "The new analysis shows that while meat and dairy provide just 18% of calories and 37% of protein, it uses the vast majority – 83% – of farmland and produces 60% of agriculture's greenhouse gas emissions."

This presents environmentally-conscious animal eaters with a stark choice: Give up eating animals, or give up on your beliefs. But there is a middle ground, which involves choosing options that have, if not a zero-impact, perhaps a lower one. Here is a list of choices, going from best to worst.

For those who aren't ready to give up meat but want a more environmentally-friendly option, switching to chicken is one of the best choices. Slate explains that chickens produce a much lower amount of carbon dioxide than cows. Cows generate about four times more greenhouse gases than chickens. In addition, chickens only create two to four pounds of manure per pound of weight, which is less than the 35 to 65 pounds cows make per pound of beef, according to Slate. Experts recommend looking for free-range chickens raised without antibiotics.

Pork is a better environmental choice than beef because pigs produce about 50% less carbon dioxide than cows, according to the BBC. Pigs are also omnivores (they'll eat anything), and this is actually better for the environment than cows that require grass or grains. A hog can help reduce food waste by consuming vegetable scraps and other food that would have been discarded. Another positive is that pigs need less feed overall compared to cows.

Technically, mussels aren't meat because they're categorized as seafood. However, they're an option for people who don't want to go vegan and still want a good source of protein. The BBC explains that mussels actually capture carbon dioxide, so they're an environmentally-responsible alternative and a better choice than farm-raised fish. They don't need to eat other food sources to grow because they filter nutrients from the water, so their impact is lower. Moreover, they don't contribute to pollution.

Shoppers who are worried about the environmental impact of their meat purchases should consider the following tips. First, try to reduce the number of days per week that you eat meat. You can switch to meatless Mondays or make the weekends meat-free. Another option is to use meat alternatives like tofu more often when you cook. Look for free-range and organic meat products. Some other label names to watch for include cage-free or barn-roaming.

There are meat options that are more environmentally-friendly. Consider making chicken, pork, and mussels more frequently for dinner.

What are some easy ways to help the environment?

As scientists argue about the best ways to preserve the environment and politicians disagree on climate change, you can take control by changing small habits. You don't have to make drastic or expensive changes to have a big impact on the environment. Consider the following five small things you can do to help save the planet.